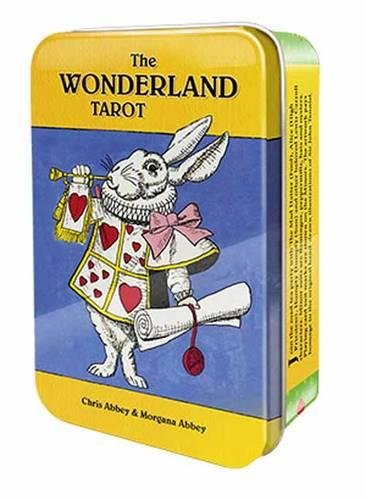 Join the mad tea party with the beloved characters of Lewis Carroll in The Wonderland Tarot, including The Mad Hatter (Fool), Alice (High Priestess), Humpty Dumpty (Sun), the White Rabbit (Judgement) and all the others. The delightful artwork by Morgana Abbey pays homage to the hand-drawn Victorian style of Sir John Tenniel, illustrator of the first edition of Alice's Adventures in Wonderland. In this whimsical tarot deck the Minor Arcana suits are flamingos for Swords, peppermills for Staves, hats for Cups and oysters for Coins. In the spirit of the Alice books, as a nod to the Queen of Hearts, playing card suit marks are included on the Minor Arcana cards, so this deck may be used for traditional card games as well as tarot readings. This pocket-sized deck comes in a tin with a 56-page booklet.